From Rubbish Tip to Reserve

Many years of hard work by an enthusiastic band of locals are behind the beautiful nature reserve of Tahuna Torea, right on the back doorstep of the Wai-O-Taiki Bay community.

Fifty years ago, the triangle-shaped spit of land close to the mouth of the Tamaki River was an inaccessible, boggy, weed-infested area, overgrown with brambles, wild fennel and gorse. It looked set to be dug up and turned into a marina or become a council tip and gradually filled in with rubbish.

Today, thanks to the efforts of a dedicated local community organisation – the Tamaki Estuary Protection Society, supported by Auckland Council – the area known as Tahuna Torea is home to a wide variety of native bird species, and is visited by more than 50,000 people a year, who enjoy meandering along the network of paths that have been built through native bush, trees and wetlands.

Visitors include locals and those from further afield, as well as school groups researching and observing the history and geology of the area and the flora and fauna in the three different habitats that the area supports – bush, fresh water and salt water. 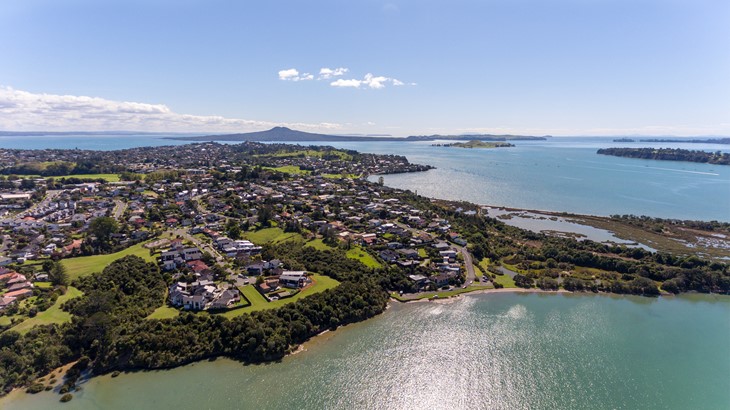 New properties in Waiotaiki Bay with the Sandspit and Tahuna Torea Reserve right of shot. 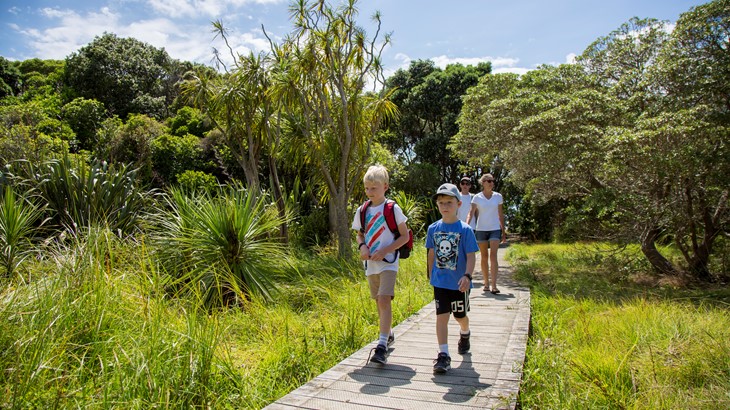 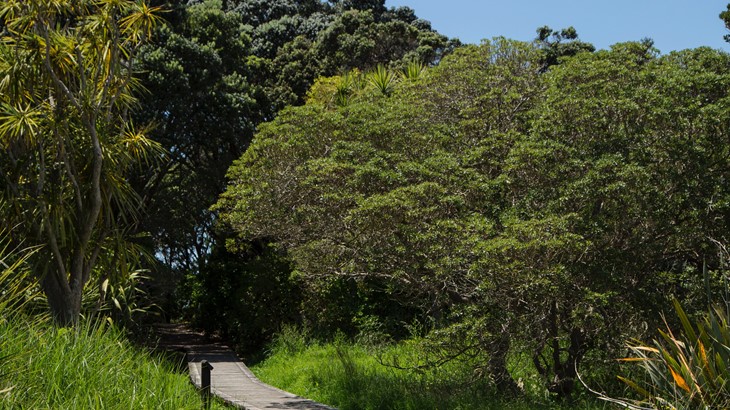 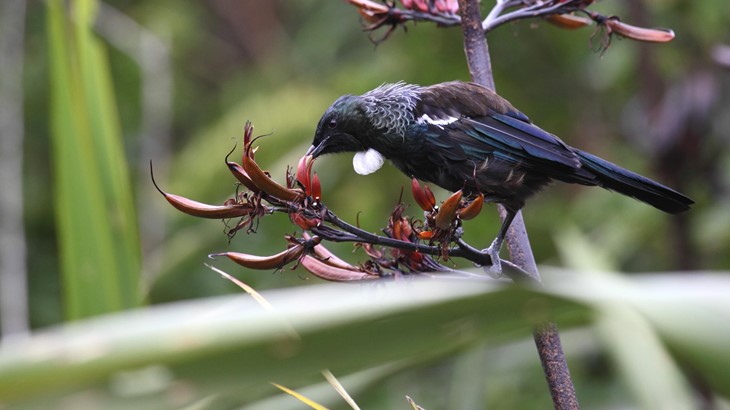 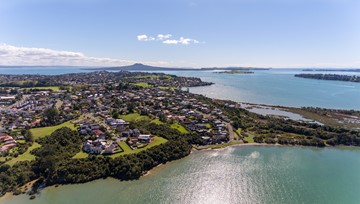 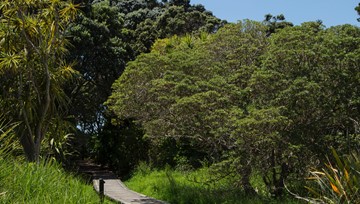 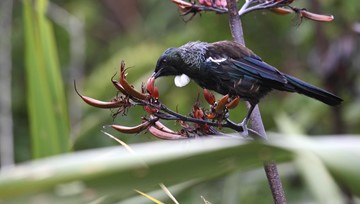 Chris Barfoot, who has been involved in the restoration project since he first moved into the area in 1971, says after 47 years of work by the whole community, they are just about at the end of their planting programme. “Most of the creative work is now finished,” he says. “We have designed and planted various forests, bush areas and wetlands. Now it’s time for the educative side to take off.”

Going back in time

But the history of the area is much longer and deeper than this; the paths and wetlands of Tahuna Torea not only give visitors glimpses of the sandspit’s rich bird life, but plenty of references to the human history that has flourished here over the past thousand years or so can be discovered throughout the reserve.

Māori were living in established villages 800 years ago when the fire and clouds of ash rose from the sea and the island of Rangitoto was formed. The rich, fertile soils of Tahuna Torea supported Māori gardens and the sandspit, stretching out about 1.5km towards Bucklands Beach, with its mix of sandbank, beach, salt marsh, wetland, tidal lagoon, mangroves and bush, was an abundant food-gathering place, providing fish, land and sea birds, and shellfish for the people living in and around the area. 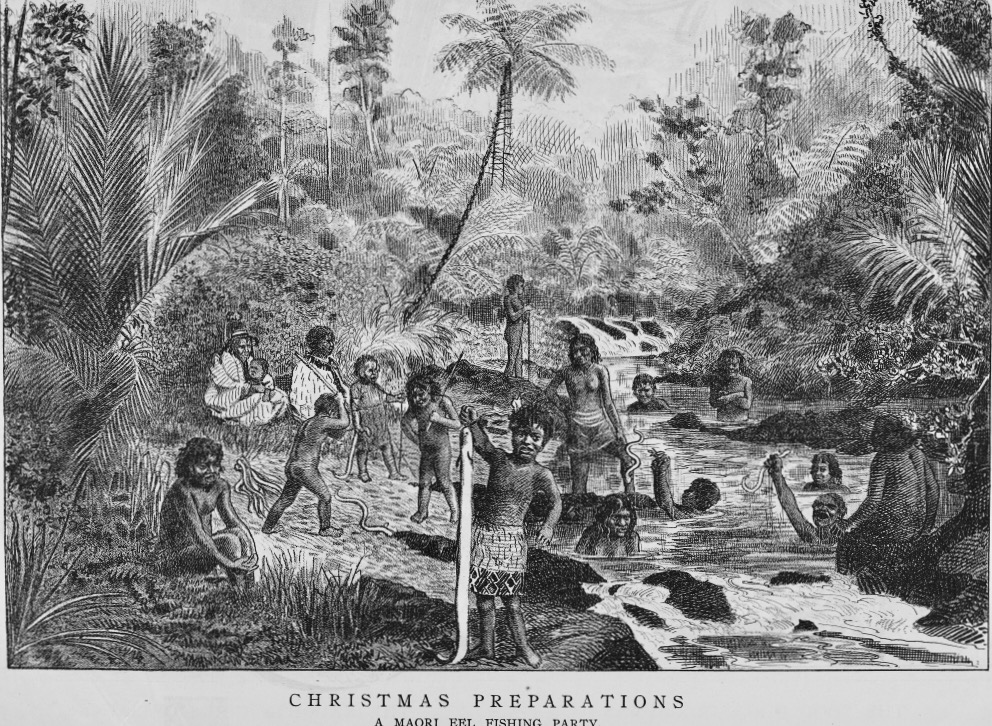 Because of its strategic position at the mouth of the Tamaki River, Tahuna Torea was an important part of defense and seasonal trade routes, and was well known for its fishing and fertile soils. To the south, along the river, were prosperous villages and gardens overlooked by two large pa. The population of the sandspit expanded in the summer as people moved in to gather and cook food – hence the large number of middens around the edge of the reserve. 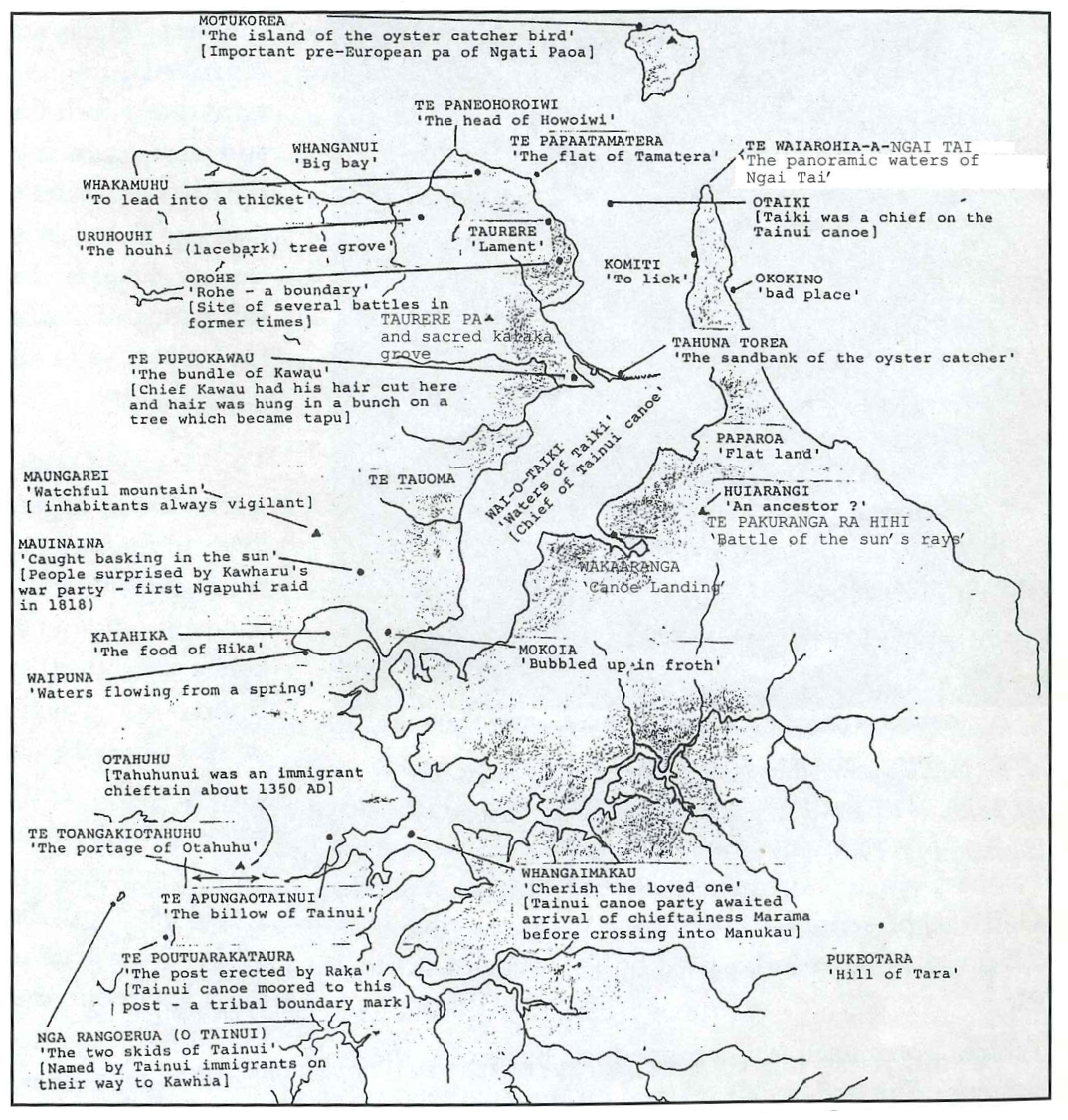 Pipi and cockle teemed on the mudflats and flounder and giant scallops were to be discovered between Motuihe and the Sandspit.

"Tahuna Torea was a great food basket for the isthmus"

Mud snails were found among the mangroves and godwits (kuaka) and oyster catchers (torea) were snared on the lagoon… The head of the tidal lagoon was separated into nine or ten ponds or fish traps into which the fish swam at high tide….. Kumara were cultivated in the rich dark sandy soil of the flats at the southern side of the Spit. In the swampy areas there was plenty of flax and raupo. Flax was used for baskets and raupo for building huts or whare. 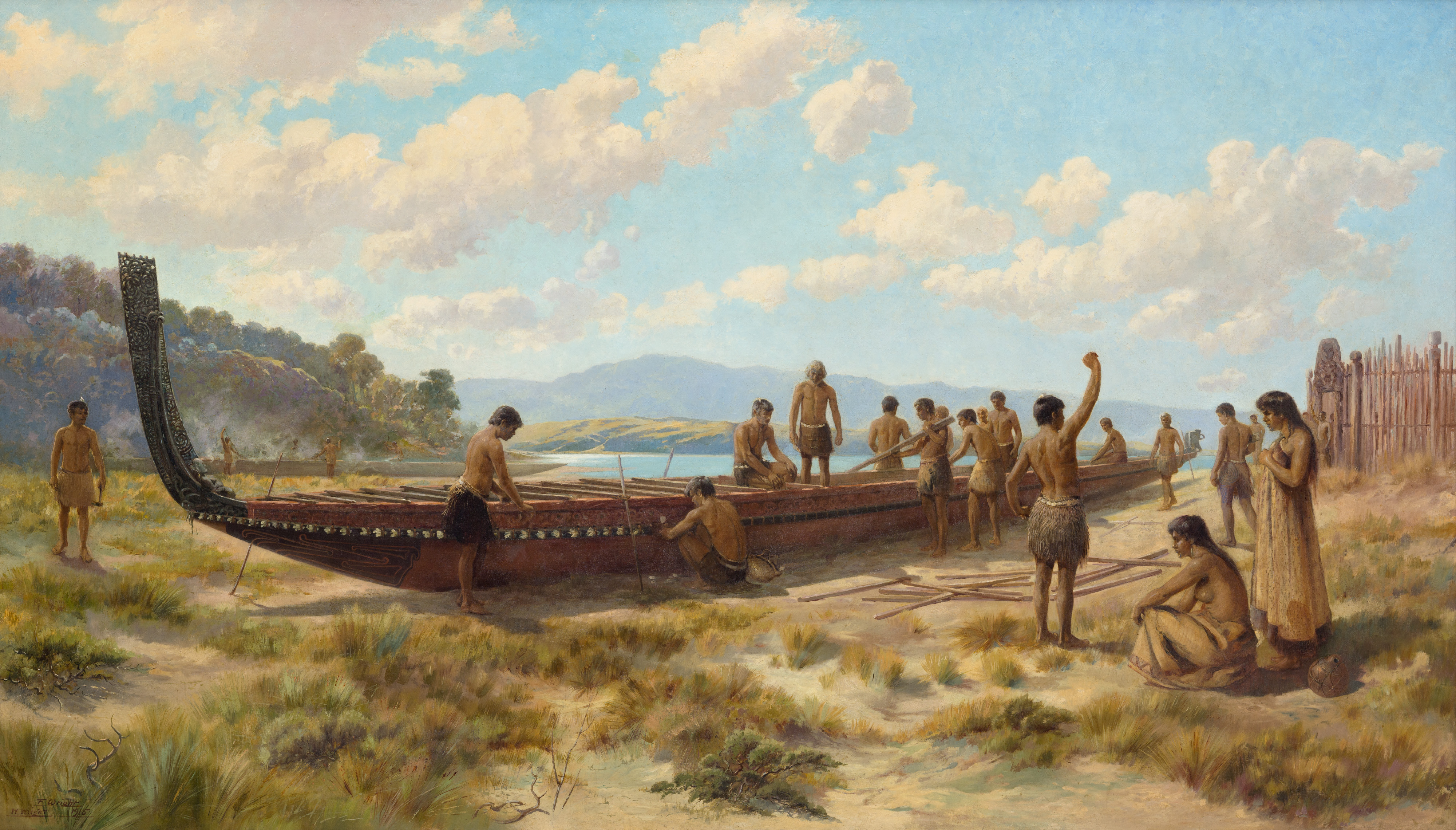 Over time the Tainui established themselves in the Auckland isthmus area, enjoying the advantages of the climate and natural riches. But the Ngati Whatua from the Kaipara began a series of raids that ended with their possession of the area in 1780. Further challenges to the ownership of the land followed, and battles continued between various tribes with muskets skewing the outcomes, until the 1820s when the land became tapu and deserted.

By the 1840s, the Reverend Henry Williams visited the land around Mokoia (near the old Panmure Bridge) and wrote that “The land was now overgrown with fern…. no signs of an inhabitant could be observed in any direction.”

About this time the Crown stepped in; Auckland had been chosen as the capital of the new colony, and the Crown bought most of the 2438 hectares of land – “the Kohimarama block” – between St Heliers and Otahuhu from Ngati Paoa under the Treaty of Waitangi. By this sale, most of the land along the western bank of the Tamaki River came under Crown ownership and was gradually subdivided and sold off to European farmers.

Between 1850 and 1950, much of the land around Tahuna Torea and Wai-O-Taiki Bay was farmed by a handful of families. The land once known as Bradley Farms is now roughly the area of housing now being developed at Wai-O-Taiki Bay and the Riverlea/Clovernook Farm, owned by Walter Yett, takes in today’s suburb of Beverley Hills. 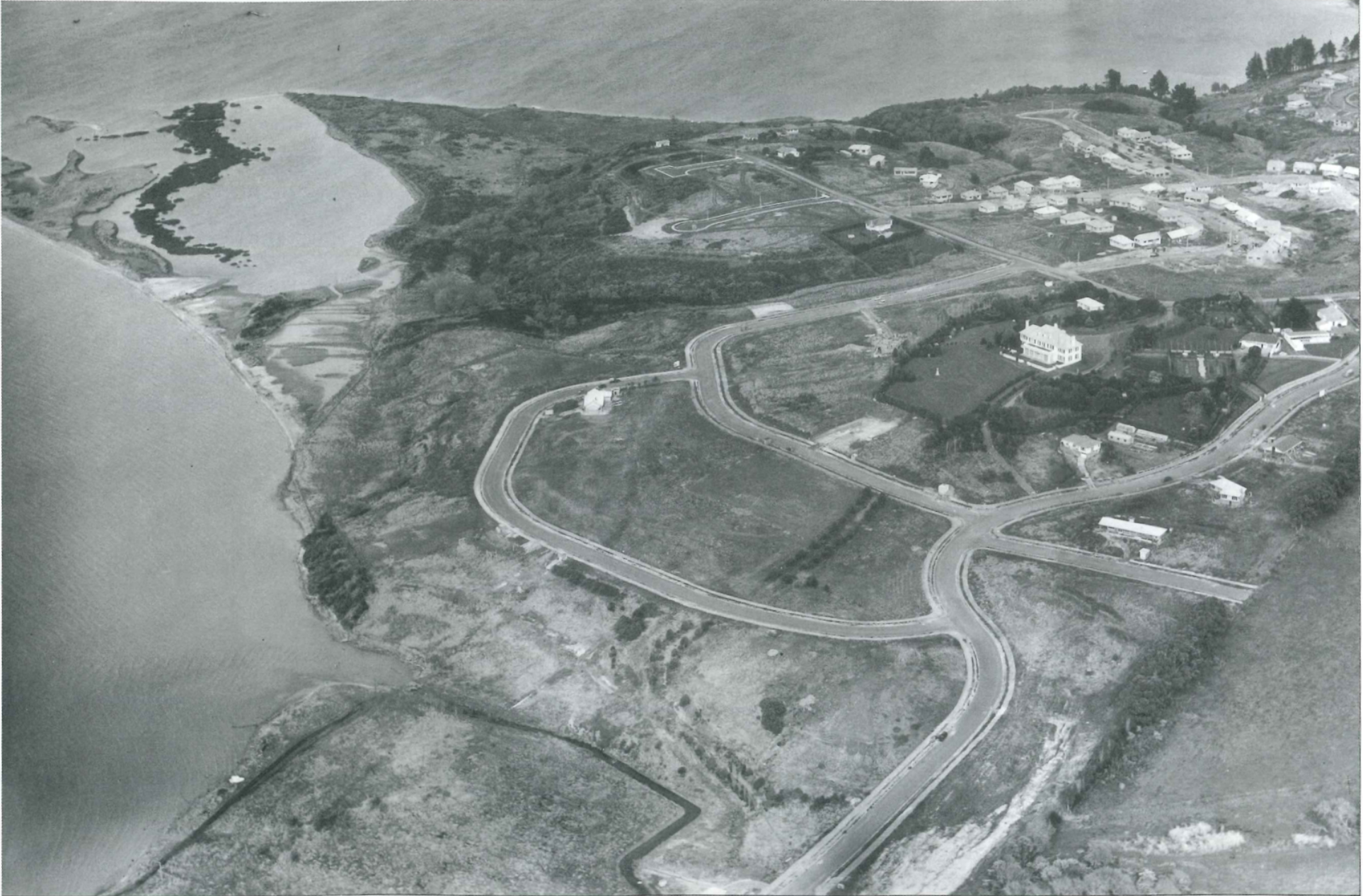 The early settlers replaced scrub and fern with English-style grassy fields separated by gorse and hawthorn hedges, they gathered the lava rocks for dry-stone walls, and grazed sheep and cattle for meat and town supply milk. Local farmers leased the sandspit, which had been set aside as public reserve by the Crown, for planting winter feed crops and as extra grazing land.

"After nearly a hundred years of European occupation the privately owned land around the end of West Tamaki Road was like a piece of English countryside, tidy, peaceful and picturesque. It was the quintessence of rural tranquility- but all this was about to change."(Chris Barfoot: Tahuna Torea: tip site to Nature Reserve)

By the end of the Second World War, Auckland’s population was growing and the Crown acquired the farms of the Bradley brothers as well as land on the other side of West Tamaki Road for housing.

By the late 1940s, the new state housing suburb of Glen Innes began to be built on the Bradleys’ farm. Part of the land across West Tamaki Road was bought by the Myers family and a 12-bedroom mansion built. A planned deer park and forest were never completed, and in 1948 Robert Kerridge bought the land and created the estate of Beverley Hills, based on the American suburb.  Other sections in this area were sold to ex-servicemen by ballot – these sites had panoramic views of the river and harbour, and backed onto a newly formed reserve that ran down to the river.

This area gradually turned into an impenetrable tangle of weeds and other gorse, fennel and blackberry after grazing stopped, the farms sold, and houses built.

In 1971, Barfoot, who was a real estate agent with his family company, Barfoot and Thompson, and his wife Pat, moved to their present home overlooking Tahuna Torea, and quickly became involved in local community moves to prevent a tip being established in the reserve. Two years before this, the residents of Beverley Hills had acted to stop a marina being built on what was then known as the Glen Innes Domain. 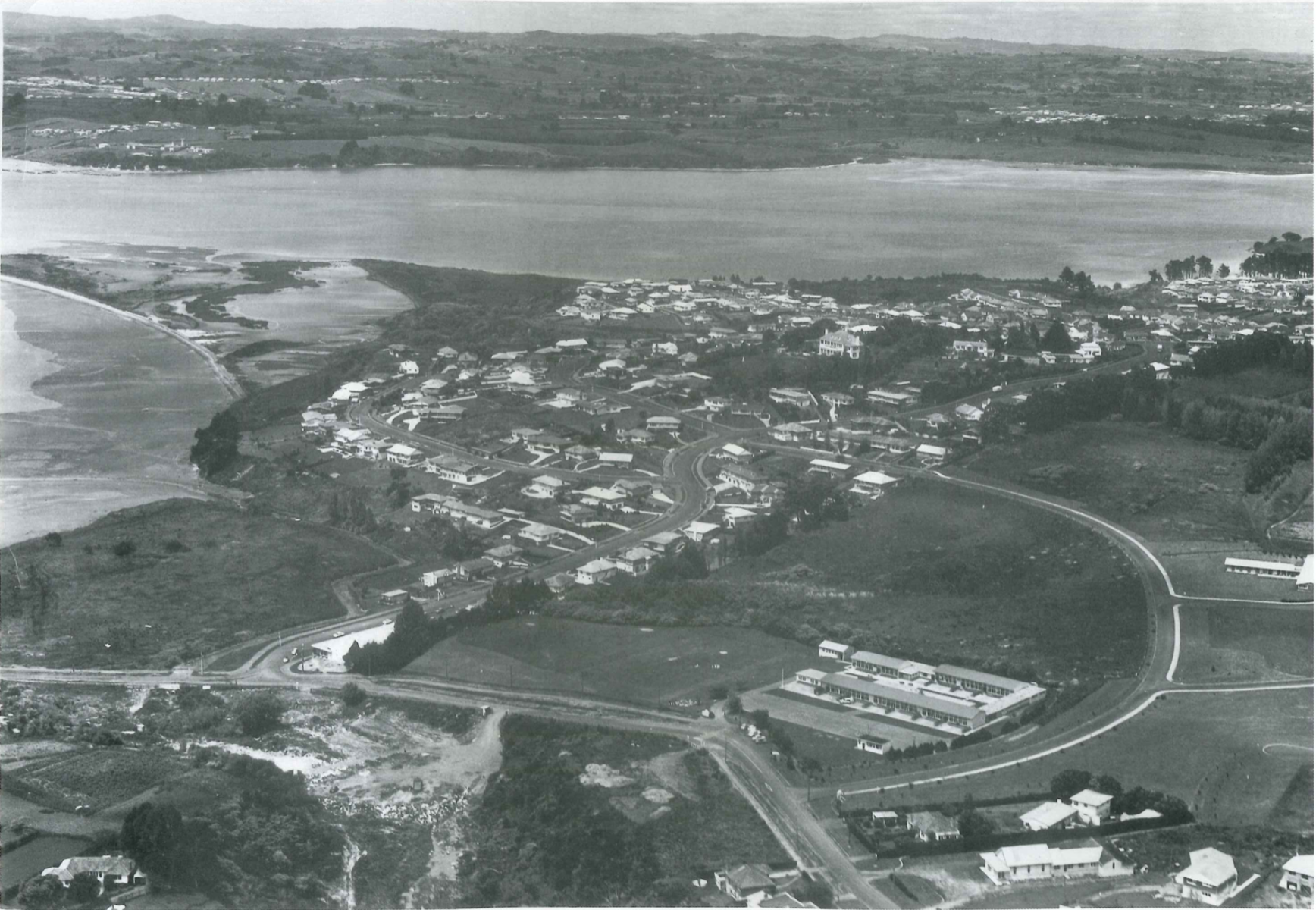 The former Glendowie tip in foreground and nearby is reclaimed Roberta Reserve, while beyond is the Glen Innes Reserve. (Whites Aviation)

“Once the area was no longer needed for farming it quickly became boggy and weedy. It was an untidy place that needed to be improved,” he says. “Wading birds were still there, but not much else because there wasn’t really any bush to provide shelter and homes for most bird species.

“Planting trees has brought the birds back and creating wetlands has encouraged other species of waders and migratory birds to return.”

The name was changed from Glen Innes Domain to Tahuna Torea Nature Reserve, which means “the gathering place of the oyster catchers”, Torea being a name which suggests the cry of the oystercatcher.

Barfoot says the community was lucky to have Welsh naturalist Roland Lockley to advise them and support their plans.  “I sold him his house,” he says, “so when we wanted to create the reserve, I went to see him.”

Lockley had set up similar reserves in the UK and written books on the subject, and he advised the society on what a nature reserve should be like and what it needed to do to create habitats that would attract birds. 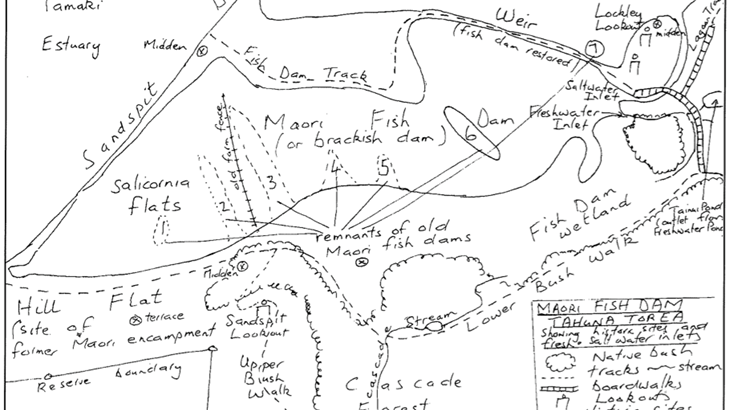 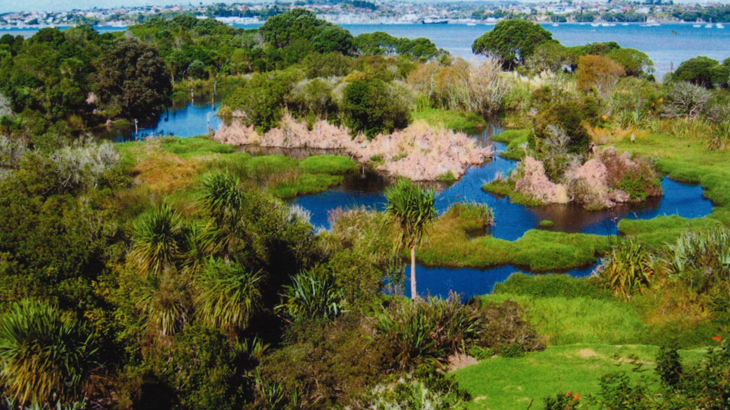 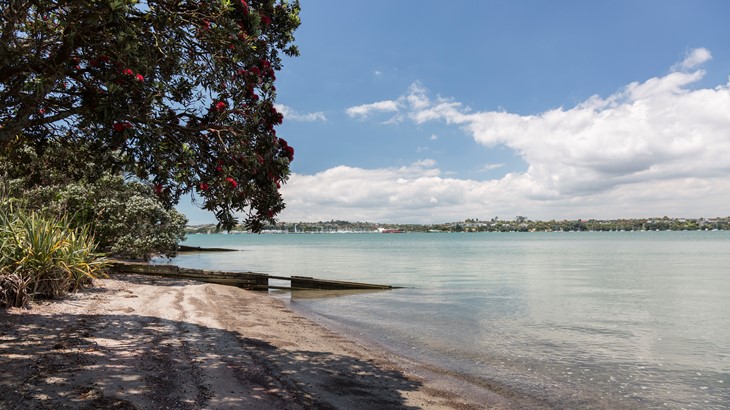 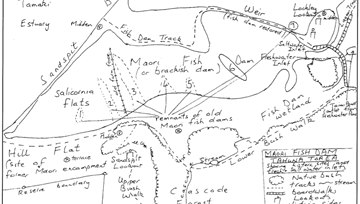 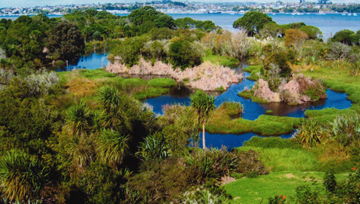 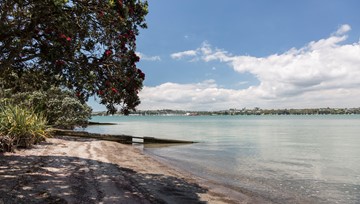 With the support of the council, community and local volunteers, piles of rubbish were cleared, a network of paths constructed, planting done and historic remains preserved. Now, birds are back, and Barfoot says the next generation of locals are beginning to take over the job of caring for the reserve.

Barfoot has had a lifelong association with this part of Auckland; his family lived in Panmure and then Glendowie when he was a small boy, and he and his three brothers ranged far and wide, fishing, sailing and exploring the area by foot and boat, often taking off overnight to explore the streams running down to the river from East Tamaki and the bush and caves around the Mt Wellington volcanic fields, and quite possibly enjoying the odd piece of fruit or vegetable from the market gardens around Pilkington Road. His father was the founder of the real estate company, Barfoot and Thompson, and for 40-odd years, Barfoot worked in the business, running offices in St Heliers and Remuera, and as a director.

If you wish to learn more about the history and work that went into saving this unique urban nature reserve then Chris has written a fantastic book titled Tahuna Torea (tip-site to Nature Reserve) which is published by the Tamaki Estuary Protection Society. To order a copy contact Chris at barfoots@xtra.co.nz

We also have 3 copies of the book to give away. To enter simply 'Like' the Tahuna Torea post that inks to this article on our Facebook page https://www.facebook.com/waiotaikibay or email marcel@creatingcommunities.co.nz to go into the draw. Entries close 5pm Thursday 15 August 2019