What is arguably one of Glen Innes’ best known businesses, Marsic Brothers in Mayfair Place, looks set to be keeping us in fresh fish for a few more years yet, with the next generation of the family taking their turn behind the counter.

Croatian brothers Wally and Ivan Marsic first opened the doors of their fish shop in Glen Innes in 1967 after buying an existing but run-down business from another Ivan – Ivan Harris. Now, after 50 years at the helm, Wally has been joined in the family business by son Daniel and daughter Stephanie.

But the story starts long before this, with two boys who were born and raised in a tiny village in Croatia, Stilja, and a nearby larger town, Vrgorac, where family members still live. Older brother Ivan left Croatia by ship looking for fresh opportunities and came to Auckland, meeting up with other members of the Marsic clan who had already started new lives here. Eighteen-year-old Wally followed four years later, lured by his brother’s reports of what a good country this was to live and work in.

Wally quickly settled down to work after arriving in Auckland, finding employment in a toy-making factory, followed by time with a relative, Ivan Simonovic, at Glen Innes Fisheries, while Ivan worked in a fish shop in Symonds Street, before the two moved to Fisher & Paykel. By 1967, Wally had saved up a bit of money and when an old fish shop in Glen Innes came onto the market for sale, he and Ivan saw a golden opportunity. 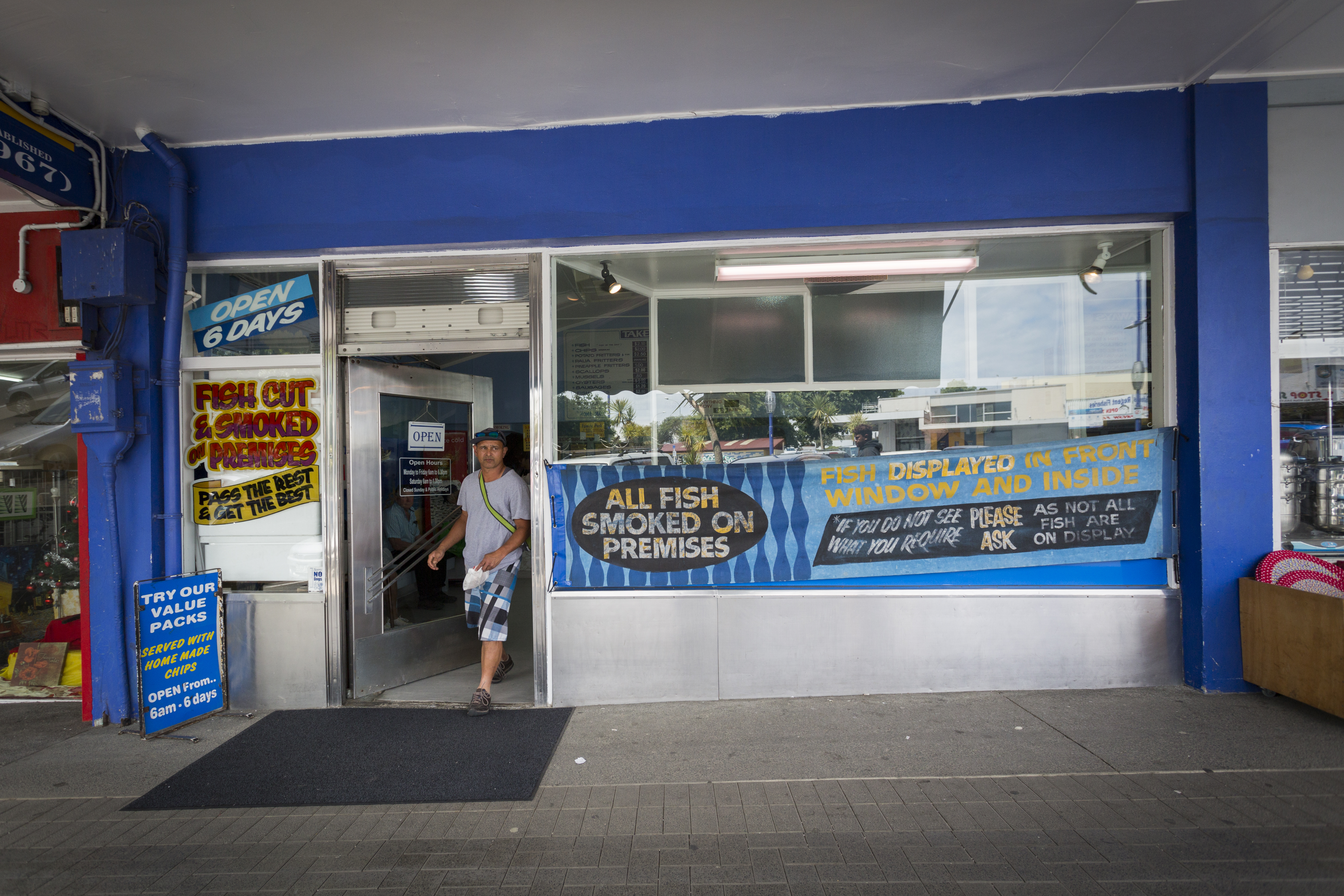 “The owner wanted £2000 for it, but Ivan had just bought a house and my savings were about £1600, so we offered that – and got it. We’ve been here together ever since, and we’ve never had an argument,” says Wally proudly.

“Brother Ivan had a big American car, a Ford Customline 1957, so we used that to transport the fish from the city market, because we didn’t have any money for a van. We took the back seats out and put tins in the back and brought the fish to the shop that way.”

“We made a big sign ‘Under New Management’ and used to dress in bow ties, white shirts and black pants.”

“The fish shop took off so quickly that we had to get a trailer too, to manage all the fish, then once we made some money we bought a ute,” says Wally. “We would clean the fish at the market while we waited for the boats to unload, then take the fillets back to the shop in the car.” 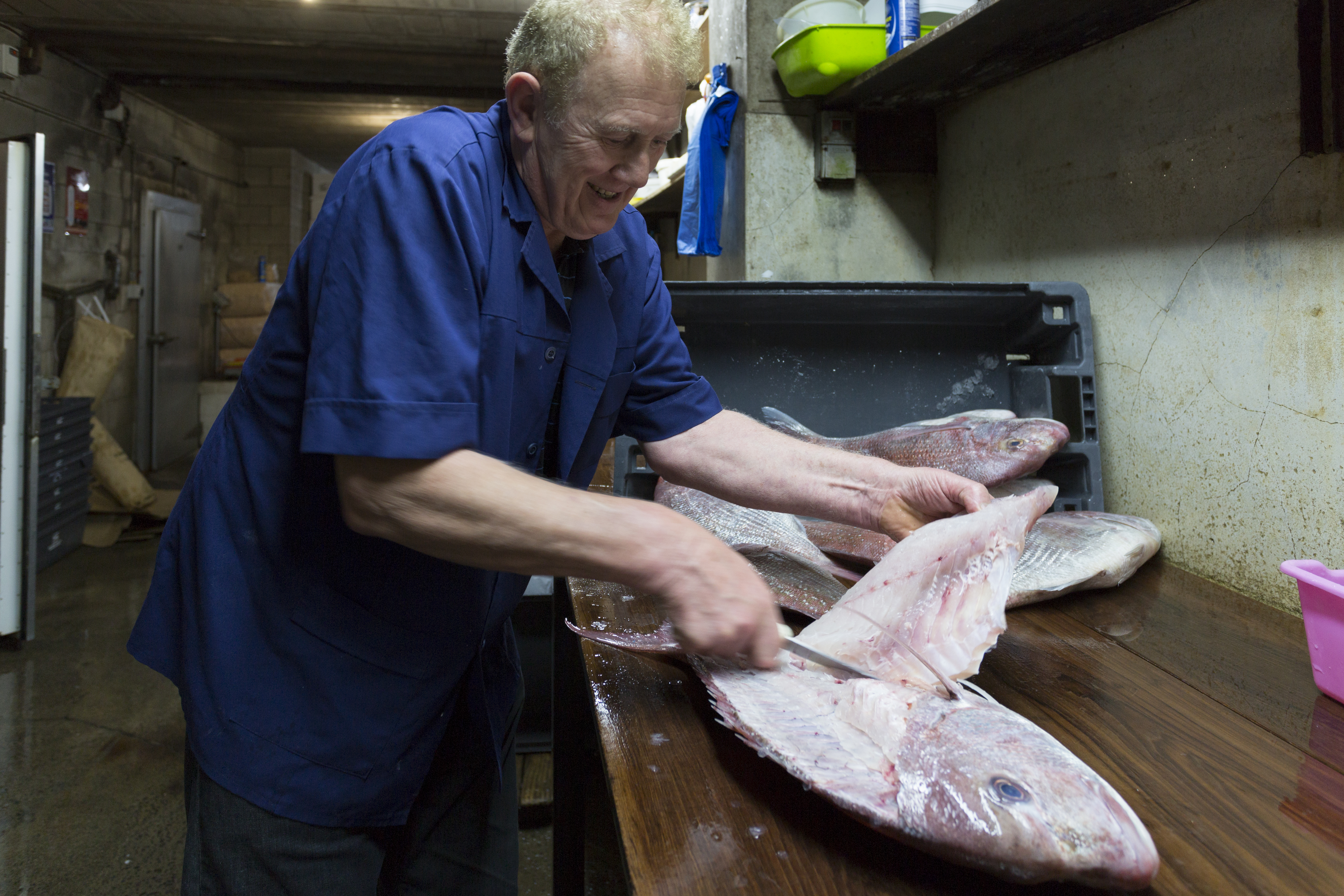 Wally attributes his skill with the filleting knife to the experience and training he had from his father, who worked on the family farm and made shoes in the village. “I worked with him when I was young, learning to cut the rubber and leather for shoes, so it didn’t take long to learn to use the knife for cutting up fish.”

After a very happy 50 years in business together, Ivan decided to retire last year, and Daniel, 33, and 29-year-old daughter Stephanie have now joined Wally.  While Stephanie’s two sons, aged four and one, haven’t shown any interest yet, Wally wouldn’t mind if they decided one day to become the third generation of the Marsic family running the business. For the time being, however, Wally is pleased that his son and daughter have decided to follow in his footsteps.

The shop is busier than ever, and their customers have hardly changed; “they are like family”, he says, and the children and grandchildren of their original customers come in each week for regular orders of fish. Daniel confides that it gives him quite a buzz when a customer says they remember seeing him and his sister around the shop, playing in a corner, or running their own little second-hand store. “Dad taught us early about the importance of working hard.”

Business is booming.  “People don’t like change, so they keep coming here to us, even after 50 years. People come from all over Auckland; we have regular customers from Warkworth, St Heliers, Kohi, Newmarket, Pakuranga, everywhere really, and of course, the locals,” says Wally.

“People are more particular now; they like their fish filleted, no bones; we fillet a lot more now. People used to like to buy a whole fish. Now they want it cleaned and ready to cook.” 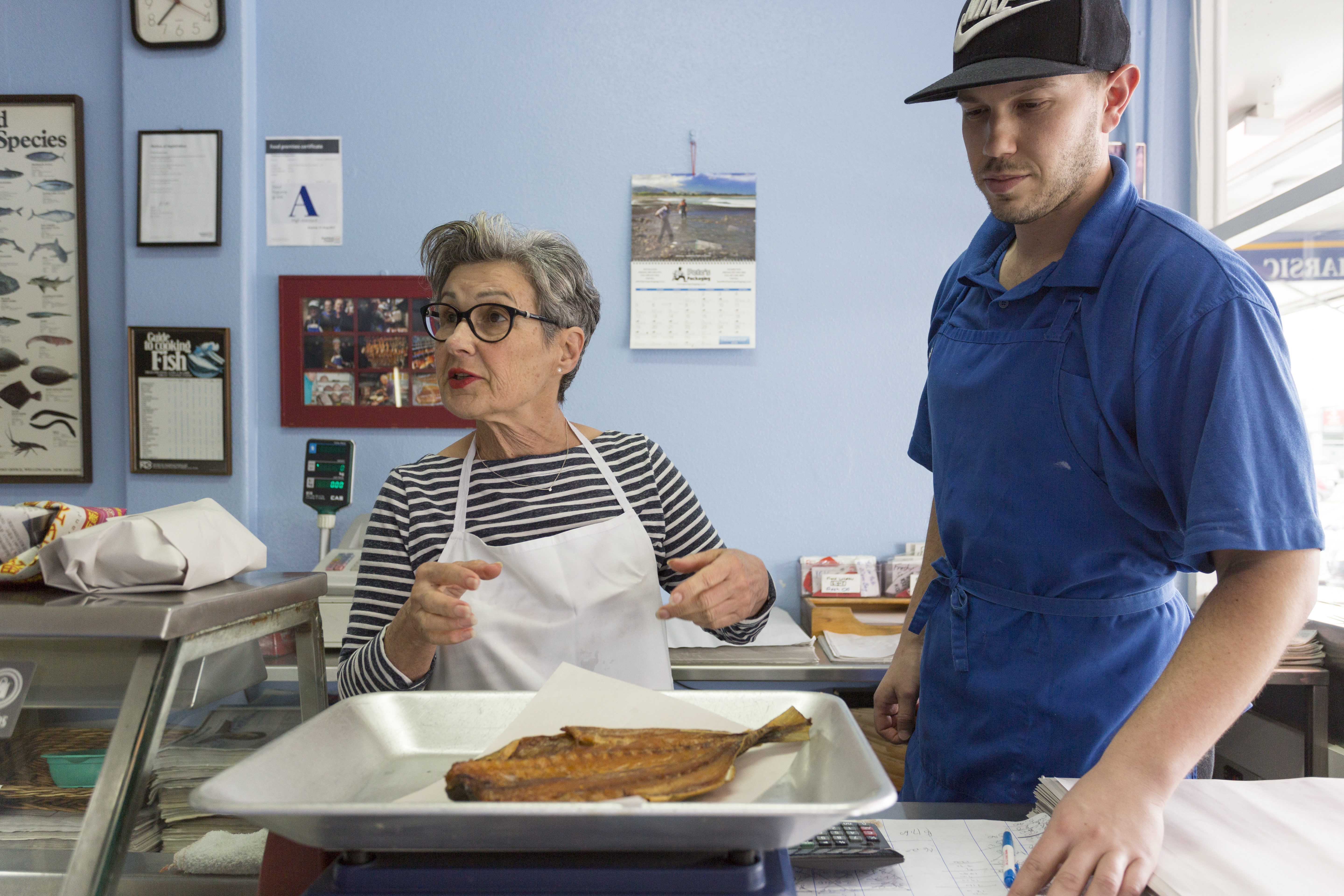 Wally still gets up a 4am, then heads off to the city fish auctions every morning from Monday to Friday at 5.30am to bid for and bring back the day’s supplies – snapper, terakihi, kahawai, gurnard, salmon, hapuku, flounder. “Gurnard is really popular these days, a lot of people buy it to cook, but it is lovely in fish and chips too,” he says.

Marsic’s fish and chips are a particular drawcard with customers, and the deep frier runs hot all day long, every day apart from a brief break on Saturday afternoon and Sunday. Any fish not sold on the same day is turned into fish and chips and sold during the afternoon or the next morning to the first customers coming in the door.

“Some fish shops only buy every two or three days, but I like to know that our fish is fresh every day.”

Wally and Daniel are behind the counter by 6am or 6.30am each morning and the shop is busy as soon as it opens: “We have people turning up in their pyjamas and buying fish and chips; some customers are coming home from work, some are going to work, and some are there because they’ve got hangovers and can’t sleep,” laughs Wally. 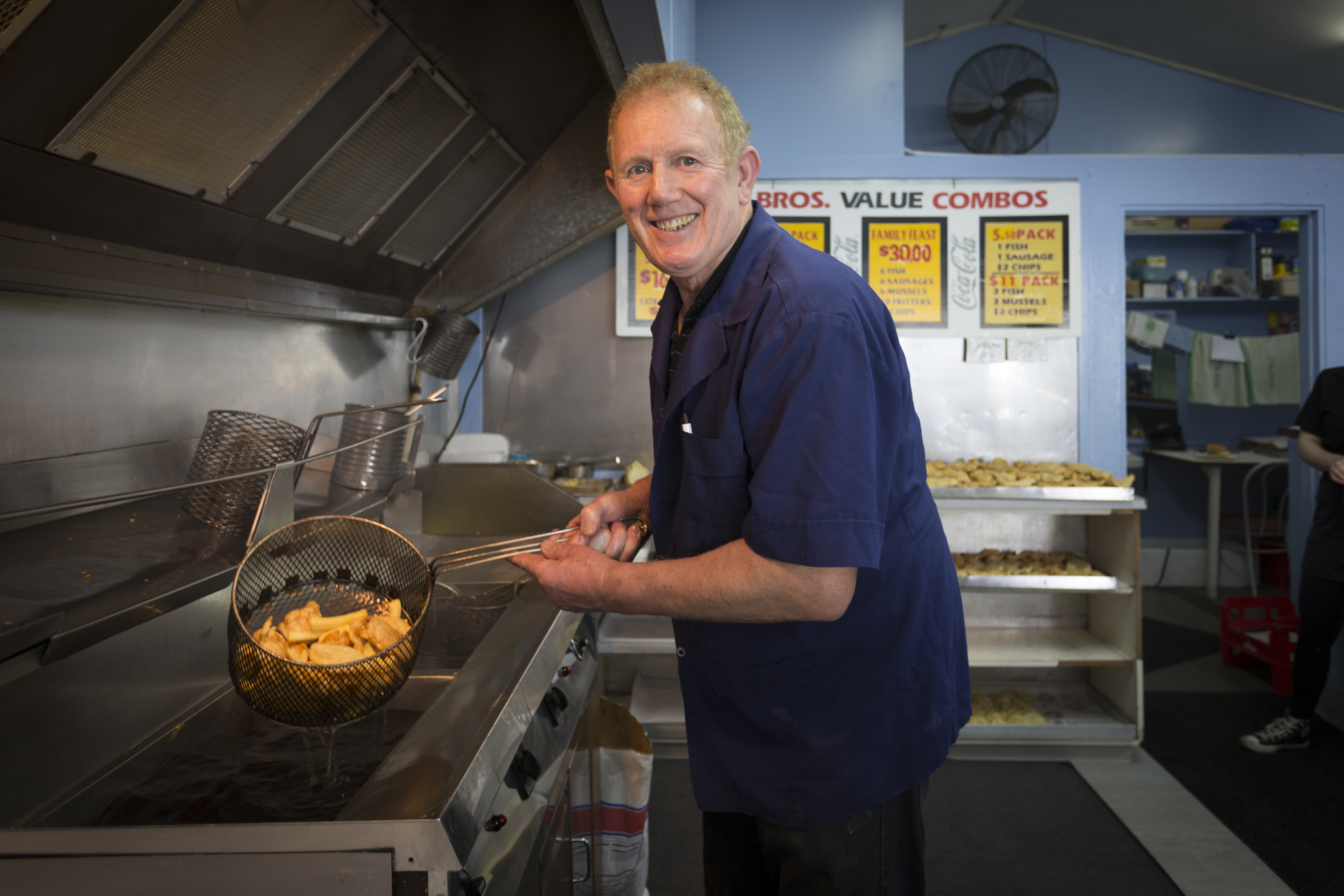 In among all this activity, the day’s fish has to be cleaned and filleted, the batter made for the fried fillets and, although the chips are no longer made from scratch on the premises, they are delivered fresh daily and have to be prepared for cooking.

Plus, a couple of times a week, Daniel and Wally fire up the smokehouse, also on the premises, and smoke fish “of every sort” for their customers, using a “special ancient Croatian recipe” that Daniel won’t disclose, but Wally says is just the right sort of wood, a bit of salt, and nothing else, “all natural, no preservative”. They also happily smoke customers’ catches for them.

And, of course, at the end of every day, the shop must be cleaned from top to toe. This is really important, as one of the reasons customers keep coming back to Marsics is because the shop is always spotless. 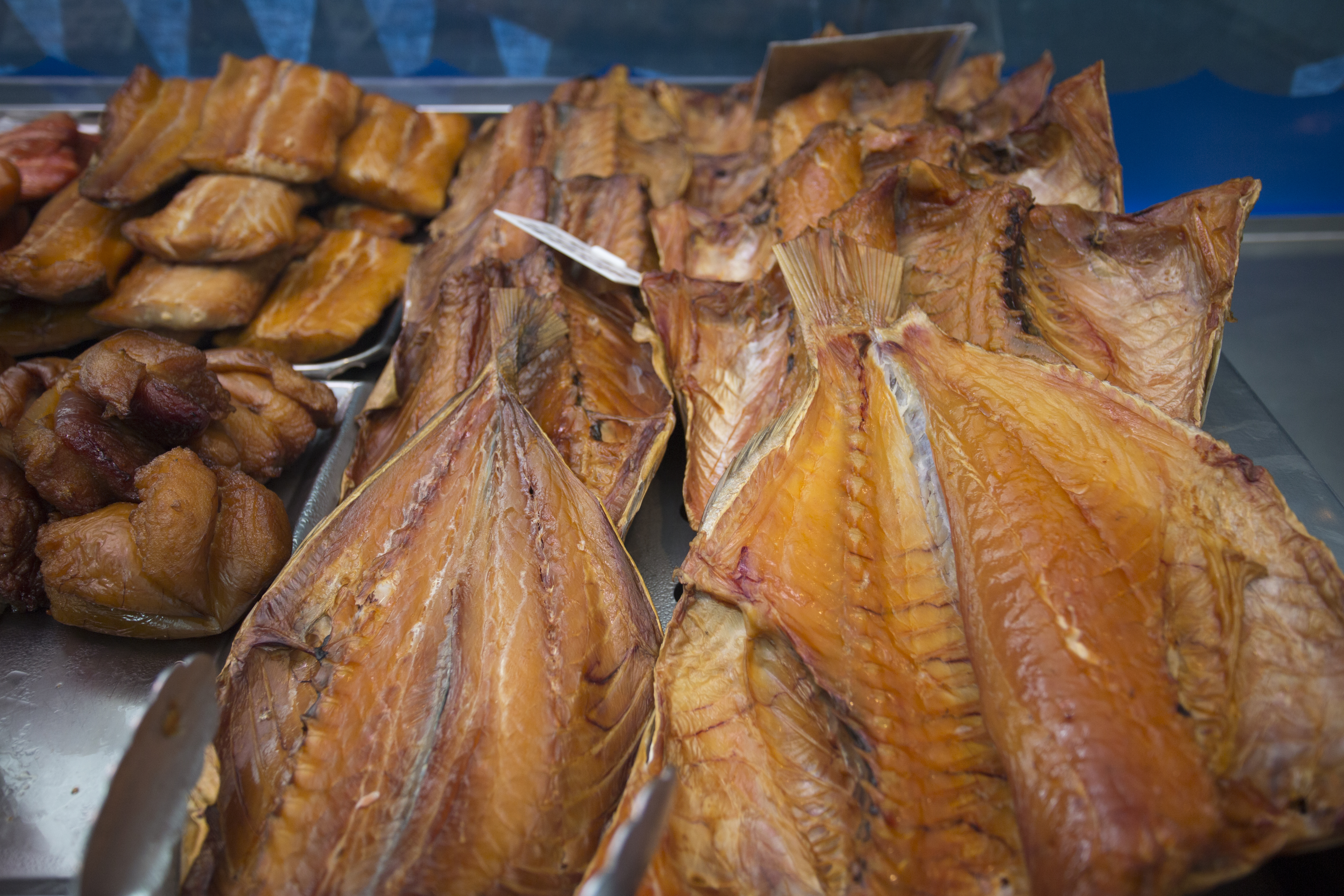 You’d think Wally would want to put his feet up on the weekend, but he’s been a keen bowler for as long as he can remember and is the proud holder of 40-odd club titles, about 15 Auckland titles and two New Zealand titles. Ivan, too, is an enthusiastic bowler and the pair have also won various competitions together. “The others in the clubs must laugh when we come out,” he says, “two old guys who can hardly walk!”

Daniel’s an equally enthusiastic sportsman, too, having played cricket since he was five, as well as coaching and managing teams and clubs, before joining his father in the shop last year.

“I’m enjoying the change. It’s very busy and the best thing has been learning what Dad has been doing over the last 50 years, hearing the stories from customers.”

“The personalities and people coming in are always interesting; there’s such a wide range of people and cultures all in the shop at the same time, all getting the same thing,” says Daniel.

When you read news stories and find Marsic Brothers used as a point of reference in Glen Innes, which is quite often, you realise just how well known they are.